By Eric BurgessMarch 22, 2010No Comments 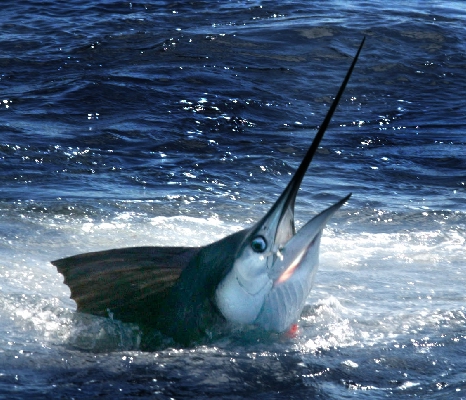 What’s great about billfishing is that you can have your cake and eat it too. You get the thrill of the hunt and allow your opponent to fight another day. Anyone who’s ever been on the rod end of the line can tell you that a very personal relationship develops with these alpha predators. I’m sure the fish feels the same way; after all she’s fighting for her life. To release her at the end of hours of give and take is, in my opinion, a no brainer. When she’s brought to the boat and you look her in the eye, you’re humbled by the magnificence of the beast. You realize that you’ve been allowed a very special experience against a valorous opponent. It’s very rewarding to be able to free her, to do battle again.

That said, some people do take billfish, whether for a trophy mount or, much more likely, as by catch on long lines or in nets. I don’t begrudge the occasional trophy, but I do have a problem with commercial fishermen whose tactics amount to sucking up every creature in the sea. The fact is that marlin, sailfish and Spearfish numbers have declined at an alarming rate, in every ocean. Populations are between 21% and 39% of sustainable yield. Enforcement by the world’s regional fisheries management organizations is sporadic at best.

So what to do? Well, one thing we can all do is not eat them. If we refuse to patronize restaurants and fish markets that trade in billfish, we can influence fishermen not to take them. Check out Take Marlin Off the Menu. This organization is sponsored by the International Game Fish Association, the Billfish Foundation and the National Coalition for Marine Conservation. Their goal is to educate consumers and restaurant owners, chefs and fish mongers about the plight of these fish. They also hope to influence policy makers to establish protection and enforce regulations.

Can this really help? Yes! In the late 70’s striped bass populations in the Northeast were plummeting. Those fish brought to boat were decreased in size and weight. They were simply overfished, as were the species they preyed upon, notably menhaden. Stripers Unlimited, a grass-roots organization of recreational fishermen, publicized the striper’s decline. Miraculously, states along the eastern seaboard agreed to impose strict regulations, due in large part to Stripers Unlimited efforts. Commercial harvesting was outlawed and recreational sanctions varied from no catch, to size and bag limits on the fishery. It took some time, but by the 80’s the stripers were back. It is one of the few success stories in salt water fisheries management, but it proves it can be done.

I hope you all have the privilege and joy of battling one of these spectacular fish one day. But even if billfishing is not your thing, I hope we all agree the world would be a lesser place without them.