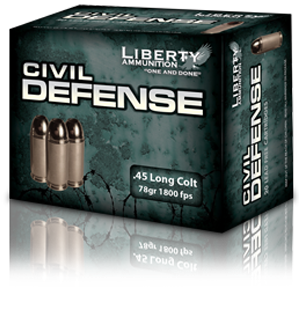 The popularity of the .45 Long Colt started in 1872 when it was designed specifically for one of the finest guns in all of America’s history: the Colt Single Action Army revolver. The powerful cartridge was an effective negotiator during our country’s push west and was used for protection and hunting by many Americans.

Fast forward to 2015 and the historic caliber has been dusted off and revamped and added to Liberty Ammunition’s expanding ammo line-up. The new .45 Long Colt is a copper, monolithic, hollow-point fragmenting round with a weight of 78 grains and a velocity of 1800 FPS delivering almost twice the speed of the traditional round.

Check out the entire line of high performance, lead-free Liberty Ammunition at www.libertyammunition.com.