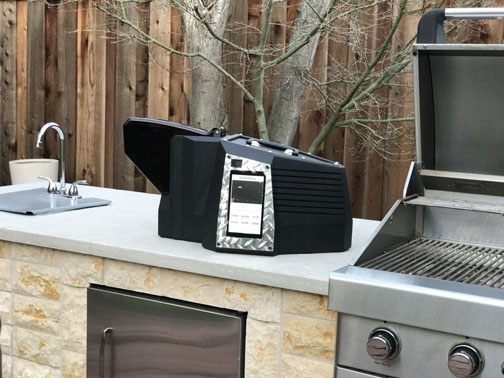 The Knife Robot, the high-tech, auto knife sharpener in portable and built-in models has exceeded its goals at Indiegogo.

“The Knife Robot project has eclipsed our expectations,” Jim Kolchin, Knife Robot founder and CEO said. “Knife Robot has a wide application for multiple marketplaces, from the home kitchen to restaurants and from knife collectors and hobbyists to outdoors men and women, the Knife Robot saves time, eliminates mess and makes for a perfectly sharp blade every time.”

Renowned knifemaker and designer, Ed Schempp, upon seeing the Knife Robot told Facebook fans, “I have used the machine. It is real.”

With the hands-off mechanism, the knife is inserted and the Knife Robot does all the work in about 5 minutes. Using seven motors sensing the knife shape in 4 DoF it precision sands any detectable burrs, removing them based on custom input of angle, speed, and pressure. Sander motor speed and the angle (10 to 45 degrees per side) can be customized on the portable version for home cooks and hobbyists. Additional customization allows for setting a different angle on each side and the amount of pressure (light, medium, hard belt pressure), and watch on the portable’s screen courtesy of a microscopic camera. Replacement belts are available on Amazon for $1.00 and last for about 100 sharpenings.

To see videos of the Knife Robot in action visit Indiegogo.com and stay up on the conversation with Facebook.