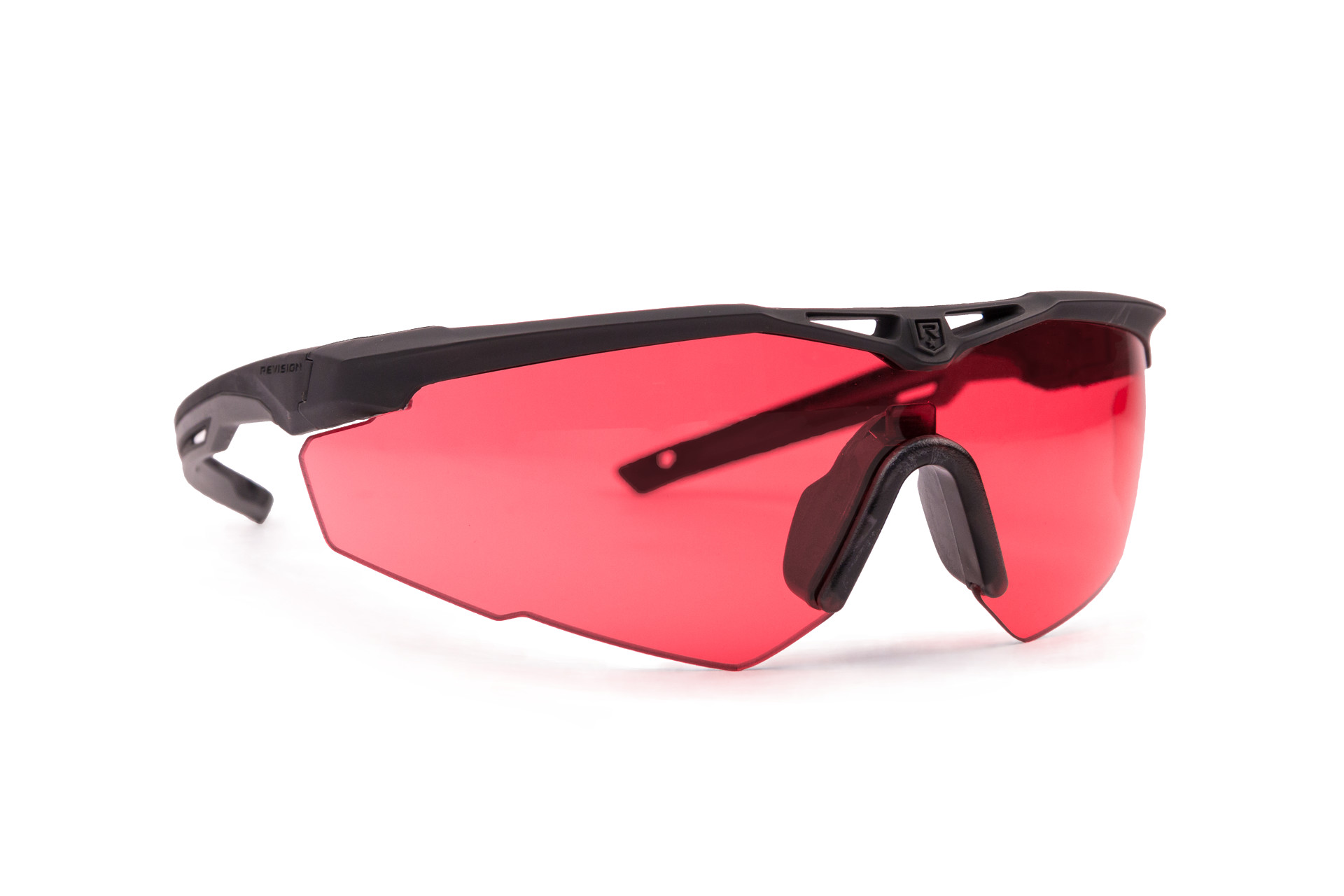 LazrBloc GF-8 ballistic laser lens in a StingerHawk frame. Made from indestructible, optical grade polycarbonate, GF-8 lenses are an interchangeable, situation-adaptable protective solution that can be manufactured for all of Revision’s proven military-grade spectacle and goggle lines

Revision Military, a world leader in protective eyewear solutions, has developed and patented a laser dye for a dual-band laser protective lens that blocks 99.9% of green laser energy and over 99% of the most powerful Near-Infrared (NIR) component of commercially available green lasers. Revision’s patented dye is used in the company’s new LazrBloc GF-8 Laser Protective Ballistic Lens. The LazrBloc GF-8 lens is a unique ballistic lens that blocks green laser emissions and the high-risk NIR energy that exists outside the visible spectrum. Importantly, this lens delivers greater visible light transmission and color recognition as compared to other laser lenses on the market, making GF-8 lenses ideal for day or nighttime use.

Around the globe, reports of lasers used against law enforcement officials, military personnel, and pilots have spiked in recent years. Lasers have been used against riot police in demonstrations as widespread as Canada, the U.S., Ireland, Thailand, Greece, Egypt, and Italy, to name just a few effected regions. The FAA (Federal Aviation Administration) and BALPA (British Airline Pilots’ Association), among other worldwide aviation officials and agencies, have recorded dramatic increases in malicious and inadvertent laser strikes on commercial airlines as well. According to the FAA, for 2015, laser strikes on commercial aircrafts topped 6,624 reported incidents, up from 3,894 in 2014. And, BALPA has found that half of all pilots experienced a laser attack in the past 12 months. Two trends are increasingly clear: these occurrences are on the rise and are more organized.

“We have always prided ourselves on our advanced protective eyewear solutions,” said Jim Hester, Vice President, Optics at Revision, “and this means identifying and adapting to new and more complex threats. Laser strikes are no longer just a military concern, they are an increasingly prevalent reality for many operating in the private sector. Revision is leading the way by providing an efficient and leading solution with the new LazrBloc GF-8 laser protective ballistic lenses.” Hester notes that these new laser protective lenses, like Revision’s previous eyewear successes in ballistic spectacles, goggles, and laser protection technology, are the result of rigorous and highly-developed design, engineering, and manufacturing processes that are constantly evolving in line with market needs. Accordingly, he adds that “in this emerging industry, Revision’s LazrBloc GF-8 laser protective lens is unmatched in its combination of ballistic protective properties, green laser blockage, Near-Infrared protection, and visible light transmission, striking an optimal balance in a single, remarkably effective, integrated solution.”

Reports indicate that illuminations by handheld lasers are primarily green (91%) in color. The wavelength of most green lasers (532 nm) is close to the eye’s peak sensitivity when they are dark-adapted, and green lasers appear brighter than other laser colors of equal power output. Inexpensive and easy to obtain laser devices may not filter and/or align the optics, or can be maliciously altered, contaminating the green laser with a potentially harmful NIR component at 808 nm. The human eye is highly sensitive and strong emissions of directed light containing hazardous wavelengths can cause permanent ocular injury in an instant. Revision’s LazrBloc GF-8 laser protective lenses are designed to block this NIR wavelength, which is undetectable by the naked eye, while still maintaining superior light transmission, color recognition, and situational awareness as compared to other dye-based laser lenses. Revision’s GF-8 lens formulation provides an interchangeable, situation-adaptable solution that can be manufactured for Revision’s StingerHawk™ Spectacle System and Exoshield™ Extreme Low-Profile Eyewear, as well as for Revision’s other Rx-compatible military spectacle and goggle lines.

Revision Military has long been at the forefront of ballistic laser protective eyewear. Hundreds of thousands of Revision’s laser protective lenses have been sold globally over the last 10 years, including to the U.S. Army, U.K. MoD, Dutch DMO, Belgium MoD, the Canadian DND, Greek MoD, Swedish MoD, the German MoD, and the South African Air Force. Seeing the increase in the malicious use of green lasers to distract or blind law enforcement, military, and aviation personnel, among others, Revision set out to design the most protective and functional laser eyewear available. The LazrBloc GF-8 ballistic lens represents an elevated level of innovation in this field. Revision has tested the GF-8 laser lens in the company’s Research & Development laboratory and has certified many of its lenses at 3rd party testing laboratories. Revision’s in-house R&D, molding and coating facility ensures that the company is able to meet customers’ specific laser protective requirements. For additional information on this product and Revision’s capabilities, or for purchase inquires, contact sales@revisionmilitary.com.

Powerful green laser illuminations have emerged as a new and widespread threat, particularly for law enforcement and military police engaged in riot control and tactical situations