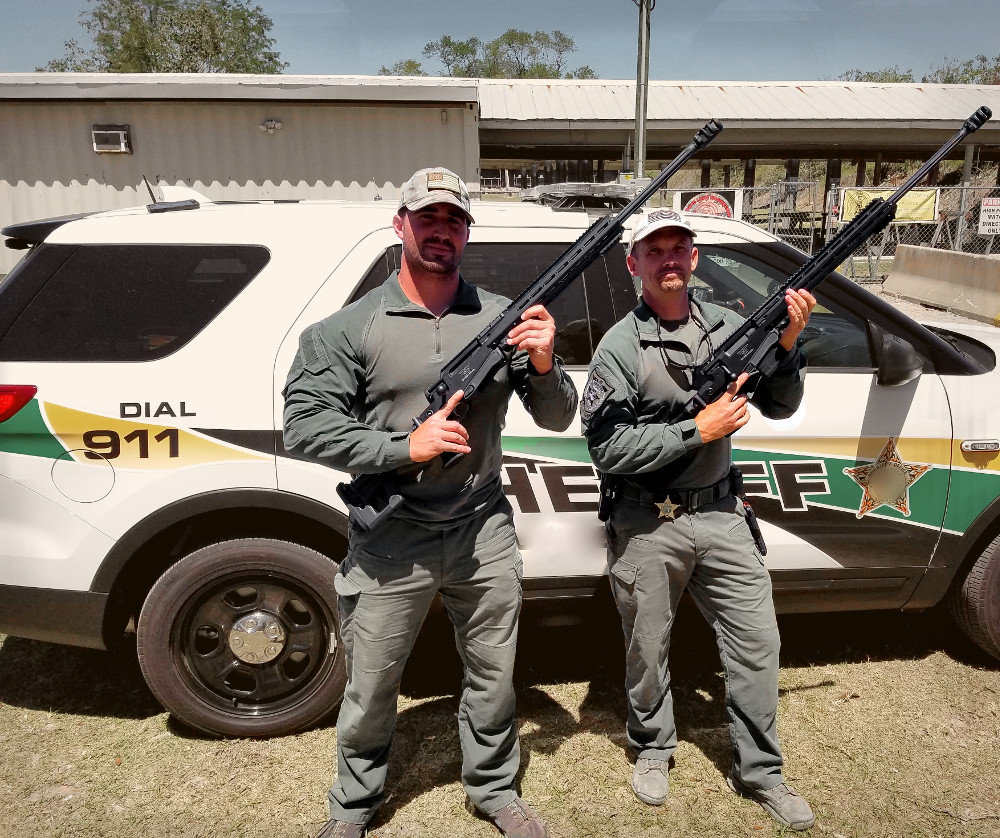 Feistritz, Austria (May 2017) – Ritter & Stark GmbH, an Austrian-based firearms design and manufacturing company, is pleased to announce the winners of the SX-1 MTR rifles it donated to the Snipercraft Challenge. The elite sniper/observer duo of Colin and Blake swept the event and took home the rifles. Due to the sensitive nature of their current assignment, Colin and Blake declined to give further information on their backgrounds. The Snipercraft Challenge took place April 7-8, 2017 in Clearwater, Florida.

“Our rifles are designed with law enforcement and military in mind and we’re glad that they’re going to a good home, where Colin and Blake will be able to use them in competitions, as well as expand the capabilities of their agency and better protect the innocent,” said Yakov Trakhman, Ritter & Stark’s marketing director.

The Snipercraft Challenge is a competitive sniper training event for police and military snipers held during SniperWeek. Using actual sniper incidents as the model, each phase incorporates documented realism. The result is a practical series of intense live-fire exercises, set up to test fitness, equipment, teamwork, problem-solving, communication skills, ability to perform under a variety of stressors and marksmanship. Participation is open only to active, certified police SWAT team and military personnel.

The SX-1 MTR has been designed by the world’s best engineers, using state of the art machinery and proprietary techniques to create an advanced long-range precision rifle. The SX-1 MTR allows the operator to quickly and easily change out calibers between .308 Win, .300 Win Magnum and .338 Lapua Magnum while in the field. All conversion kits contain the elements necessary for an easy transition from one caliber to another.

In addition to the ease of interchangeability, the barrels come with a MIL-STD 1913 Picatinny rail pre-installed, allowing the operator to pre-sight optics on each barrel, eliminating any need to re-zero the rifle when changing caliber. This is especially important for those professionals who, while in the field, must adapt quickly as their mission changes. The SX-1 MTR’s modularity also allows the utilization of different aftermarket magazines, triggers and grips, providing tactical operators with the ability to customize the rifle to their specific body-type and mission.

One of the secrets to Ritter & Stark’s unprecedented accuracy is its unique barrel production. No other barrel maker in the world manufacturers its barrels like Ritter & Stark. The rifling is done in a CNC-controlled electrochemical machine. This avoids the transmission of thermal effects and mechanical stress to the material. Furthermore, this process allows Ritter & Stark to produce barrels with unique uniformity and within tolerance zones that were not possible in serial production before.

Every rifle is tested at the factory and can achieve 0.5 MOA 3-round groups or better using factory match grade ammunition.