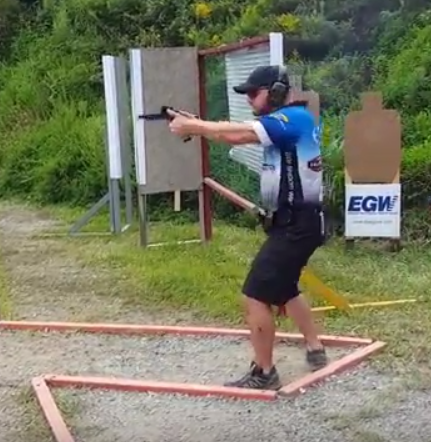 Westport, Conn. (August 2017) – Shell Shock Technologies, LLC., an early stage technology and manufacturing company focused on developing innovative case technologies for the ammunition industry, is pleased to announce its sponsored shooter John Vlieger has won High Overall in the Open Division at the 2017 EGW USPSA Area 8 Championship, held Aug. 24 – 27, 2017 at the Ontelaunee Rod & Gun Club in New Tripoli, Pennsylvania. Vlieger finished with 1565.6420 match points and a time of 187.27. This was his first Area win.

“The Area 8 USPSA Championship was an excellent competition that tested all aspects of a shooter’s ability. I am happy to say that I was able to pull off the Open Division win by the skin of my teeth and Shell Shock Technologies NAS3 cases helped me,” commented Vlieger. “Shell Shock Technologies’ cases give me several advantages over traditional ammo. They weigh less, allowing me to take extra ammunition with me, have a higher-pressure rating, allowing me to use +P+ competition loads safely and they have a natural lubricity which makes for more reliable feeding and extraction. I shoot 400+ rounds in a day and using Shell Shock’s cases gives me the confidence I need so that I can stay focused on the shooting and not have to worry about my ammunition being up to the challenge.”

Vlieger can be seen competing next at the 2017 USPSA Area 4 Championship, to be held at the United States Shooting Academy in Tulsa, Oklahoma, Sept. 8 – 10, 2017.

John Vlieger began seriously competing in the action shooting sports in mid-2014 while stationed at Fort Richardson, Alaska. When relocated by the Army to Fort Campbell, Kentucky, Vlieger found easier access to the larger matches across the Eastern United States and competed in over 15 major pistol events in 2015. Initially focused on Limited Division with iron sights, Vlieger found his calling in Open Division. He has since completed over 30 state, regional or national level matches with titles from Alabama State and the Indiana 400, as well as an 11th place finish at U.S. Nationals. Vlieger plans to compete at over 18 competitions in 2017.