[youtube https://www.youtube.com/watch?v=ub4OswUhLwo] ULTIMATE GLOCK MELTDOWN
Following his meltdown of a full auto-converted Century Arms WASR 10, Eric (aka Iraqveteran8888) is back with another extreme torture test. This time, however, the victim is something nearly every gun owner is familiar with, a Gen3 GLOCK 17. We won’t spoil the video for those who haven’t watched, but it’s amazing just how many rounds it takes for the handgun to “fail.” Fail being in quotations because as Eric goes on to explain, the test probably could have gone on even longer had he been able to better examine the firearm while hot. Speaking of hot, the thermal camera makes a great addition to the footage, detailing just how heated the barrel and frame become during the test—enough to start melting Eric’s glove. In the end, not everyone is a GLOCK fan, but after watching this video, there’s no denying you have to respect their design, function and reliability. 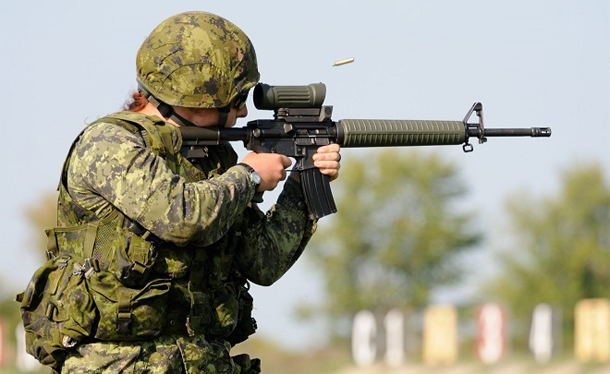 A WOMAN AMONG MEN
Some scoff at female shooters and soldiers, but Sgt. Tatyana Danylyshyn, a reservist in the Canadian Scottish Regiment, is not one to dismiss. Earlier this spring, Danylyshyn claimed the Hager Hollon Trophy for Top Rifle Shooting with a score of 190 out of a possible 250 at the 24th Armed Forces Skill at Arms Match hosted by the U.S. Army National Guard Marksmanship Training Center in North Little Rock, AR. She wasn’t done yet, though, next heading across the pond for the annual Bisley shooting competition, held last month southwest of London. It was here that her skills really impressed, winning the operational service rifle category with her field standard Colt Canada C7A2 rifle and 3.4x28mm C79A2 optics. Grateful for the skills she’s learned and honed through the Canadian Army, Danylyshyn will be taking her talents to the Connaught Ranges in Ottawa this September. (via Guns.com)

[youtube https://www.youtube.com/watch?v=EaZGaJrd3x8] MACHINE GUN CRUZ
Don’t know who to support among the 17 Republican candidates running for president? This video might just sway you. Born in Canada but raised in Texas, U.S. Senator Ted Cruz knows his way around a gun. As Cruz shows in this recent video from the Independent Journal Review, he also knows the Texas trick to cooking bacon—firepower. Armed with an AR-15, Cruz hits the grocery store before visiting the range to make breakfast. “There are few things I enjoy more, than on weekends cooking breakfast with the family. Of course in Texas, we cook bacon a little bit differently than most folks,” Cruz says in the video. Cooking bacon using guns is nothing new (see other videos here and here), but it’s definitely a first for a presidential candidate. (via Outdoor Hub)

Join the discussion No Comments