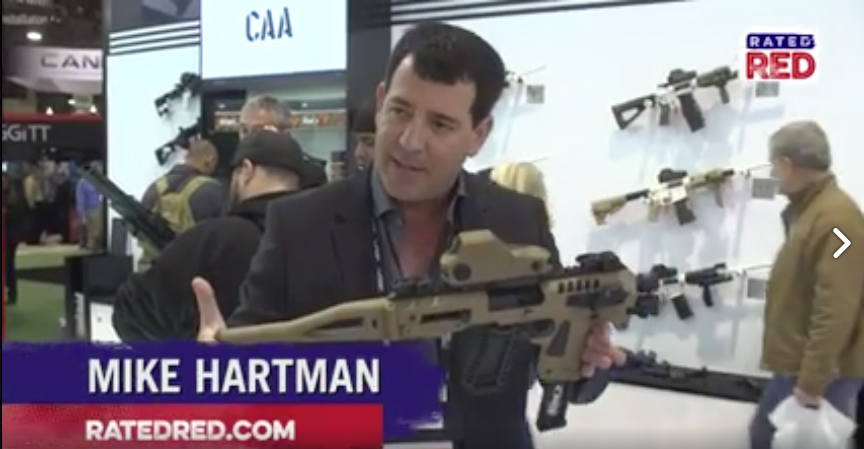 Pompano Beach, Fla. (April 2017) – CAA CEO, Lt. Col. (IDF Ret.) Mikey Hartman, explained the Micro RONI conversion system to Rated Red’s Richard Ryan at the 2017 SHOT Show, never thinking that the impossible would happen. The video, launched on Rated Red’s YouTube Channel was shared on the CAA Facebook page on March 23rd and quickly went viral. Within three days the demonstrative video reached 2.5 million views and continued to grow. Now, a little over a week from its debut, the video has garnered over 6.6 million views.

“The experience of having a video go viral has been phenomenal for the CAA brand,” Mikey Hartman explained. “It’s been quite a wave, our internet web visits and sales have jumped over 1200%!!!! We are working throughout the weekends to get product out the door. We have a totally new base of customers and I love them all!!

Hartman’s commitment to growing CAA’s brand and bringing the Micro RONI to the US shooting sports public has been commendable. He moved his family from Israel to the United States to lead the US business initiative, developed an abbreviated IDF training course from the IDF Marksmanship Doctrine he wrote for the soldiers training in the IDF and gave an intensive three-day media personnel course that resulted in multiple media opportunities, and has traveled to his retailer and distributor customers to gain new knowledge about the US marketplace.

“At SHOT Show, I did several videos for some bloggers and internet sites, but I could tell the Micro RONI was still new to the media and its public,” Mikey said. “The Micro RONI was designed to up a user’s performance and accuracy out to 200 yards and beyond with his Glock pistol. And its performance exceeded our expectations, as it will the customers. Whether it is used for home defense or just increasing your distance and accuracy at the shooting range, the Micro RONI is the hottest selling accessory we have right now.”

“CAA’s non-NFA Micro RONI Recons and Stabilizer Brace models are by far the most cost effective, quick-to-assemble and disassemble conversion units on the market today,” Mikey added. The Micro RONI platform is simple to use by inserting the pistol into the platform, locking it and it is ready to go. Using the Micro RONI platform, users will find they can shoot more accurately at a longer range, and with the added advantage of less felt recoil. Featuring top and side rails for the addition of optics, lights and lasers, the Micro RONI also features ambidextrous trigger-guard safety and charging handle.

Hartman is gearing up to take CAA’s Micro RONI and IDF training to select retailers across the country over the next year. Participating retailers must have access to a shooting range where Hartman will demonstrate to customers and retailer staff how to use the Micro RONI to its best advantages and how the IDF trains their soldiers to be some of the best marksmen in the world.

The Micro RONIs are available online or at your favorite retailers. See more about the family of Micro RONI’s at caagearup.com.