Grassroots Partnership Between Two Non-Profits For The Good of The Arts, Culture, and Philanthropy 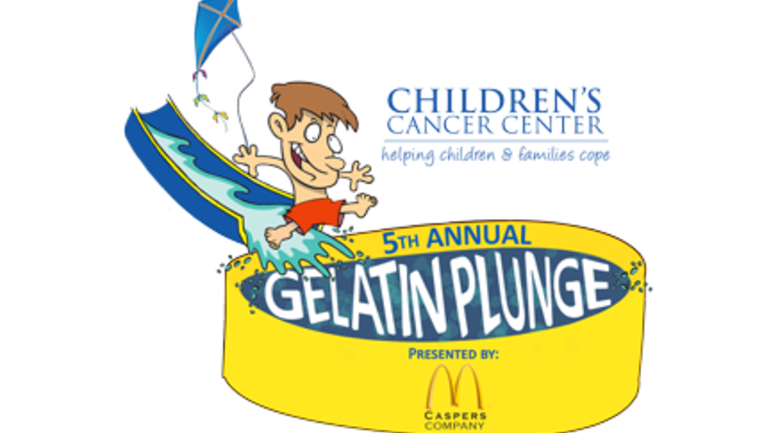 From ringside to (gelatin) poolside, the cast of the longest running professional theatre’s current production will take the plunge to raise money and awareness for Tampa Bay’s 5th Annual Gelatin Plunge held by the Children’s Cancer Center.

Tampa Bay, Fla. (June 8, 2017) – The Children’s Cancer Center and Stageworks Theatre have combined to support each other in a meaningful way. First, in the promotion of a play about wrestling, life, culture, and American values, the Pulitzer Prize nominated “The Elaborate Entrance of Chad Deity” and the other in the promotion of the biggest annual fundraiser for the Children’s Cancer Center the infamous “Gelatin Plunge.”  The Gelatin Plunge is a fun-filled event to benefit kids in their battle with cancer and chronic blood disorders, as well as providing support for the entire family.

In “The Elaborate Entrance of Chad Deity” actors portray wrestler’s that power-bomb each other, endure the camel clutch, take falls, and speak about the injustices in our society. On the morning of June 17th this ensemble cast will show their support as they all literally power-bomb themselves into a giant vat of gelatin as part of the Children’s Cancer Center’s 5th Annual Gelatin Plunge, working hard to raise money for children in need of emotional, financial, and educational support battling cancer and chronic blood disorders. The cast will remain after their “power bomb” to autograph authentic “The Wrestling” Trading cards that feature wrestling photos of the characters they portray in the play and take photos with kids. It’s all free with the option to donate toward the Gelatin Plunge.

Later that afternoon at 3:00 PM, the cast of “The Elaborate Entrance of Chad Deity” will be dedicating an entire matinee performance that same Saturday June 17, to the Children’s Cancer Center. Listen to your local radio stations for details or call the Stageworks box office to find out how you can get a free ticket to this performance while supplies last.

It is important to note that the play does carry the equivalent of what would be a movie a PG-14 rating and therefore while young children will certainly enjoy the plunge and the free autograph sessions, kids under 14 years of age are not appropriate to attend the play.

“We’re so excited to be involved in the opportunity to help promote the Gelatin Plunge for the Children’s Cancer Center. It is one of the most meaningful things we’ve ever been a part of. As the Artistic Director of a non-profit, I understand how important raising money is to fund a cause for an organization. And I think this event represents a very entertaining way to engage people from all walks of life to donate to this critically important charity,” said Karla Hartley Artistic director Stageworks Theatre.

“The Gelatin Plunge is one of our most popular and dynamic fundraisers. It’s fun for kids. It’s fun for people and sponsors. In a word it’s simply, “exciting” and we’ve raised more than $500,000 since the event started in 2013. It makes such a huge difference in these kids’ lives. We encourage everyone to donate towards these actors’ plunge. So many wonderful organizations and people have already donated generously, but we have not yet met our fundraising goal just yet. Please go to the Chad Deity’s team page. Each donation no matter how big or small makes a difference in these kids’ lives,” Patty O’Leary, Children’s Cancer Center Executive Director added.

What:  The 5th Annual Gelatin Plunge to benefit the Children’s Cancer center and The Stageworks Theatre production of “The Elaborate Entrance of Chad Deity”

Why: To raise money for Chad Deity cast taking the plunge which will benefit the Children’s Cancer Center at https://childrenscancercenter.kindful.com/gelatin-plunge-2017/the-cast-of-chad-deity1

Stageworks Theatre is not afraid to show socially relevant plays in Tampa, Florida. We are Tampa’s longest running theatre, open for over 30 years. We’re located in the Channel District of Downtown Tampa. Come check us out!

About the Children’s Cancer Center (CCC):

The Children’s Cancer Center (CCC) is a non-profit organization dedicated to serving more than 1,000+ families with children who have cancer or chronic blood disorders. Through 24 different programs, the CCC offers emotional, financial, and educational support to help these families cope with life-threatening illnesses through every stage of their journey: diagnosis, treatment, survivorship, and too often, bereavement.

About the Gelatin Plunge:

The Gelatin Plunge is your chance to make a difference in the lives of the children and families supported by the Children’s Cancer Center (CCC). Started in 2013 by the CCC, the Gelatin Plunge has raised more than $500,000. The Plunge embodies the lively spirit of the CCC and has attracted over 500 people to plummet down a slide into a pool filled with 2,700 gallons of orange gelatin.

This charitable event has proven to be a moving and one-of-a-kind cause which is covered by multiple media outlets throughout the Tampa Bay area.
Join us on Saturday, June 17th, to raise funds which will go toward all of the support provided to more than 1,000 families that receive educational, emotional, and financial assistance from the various programs provided by the CCC.

~ It takes more than medicine to be well ~