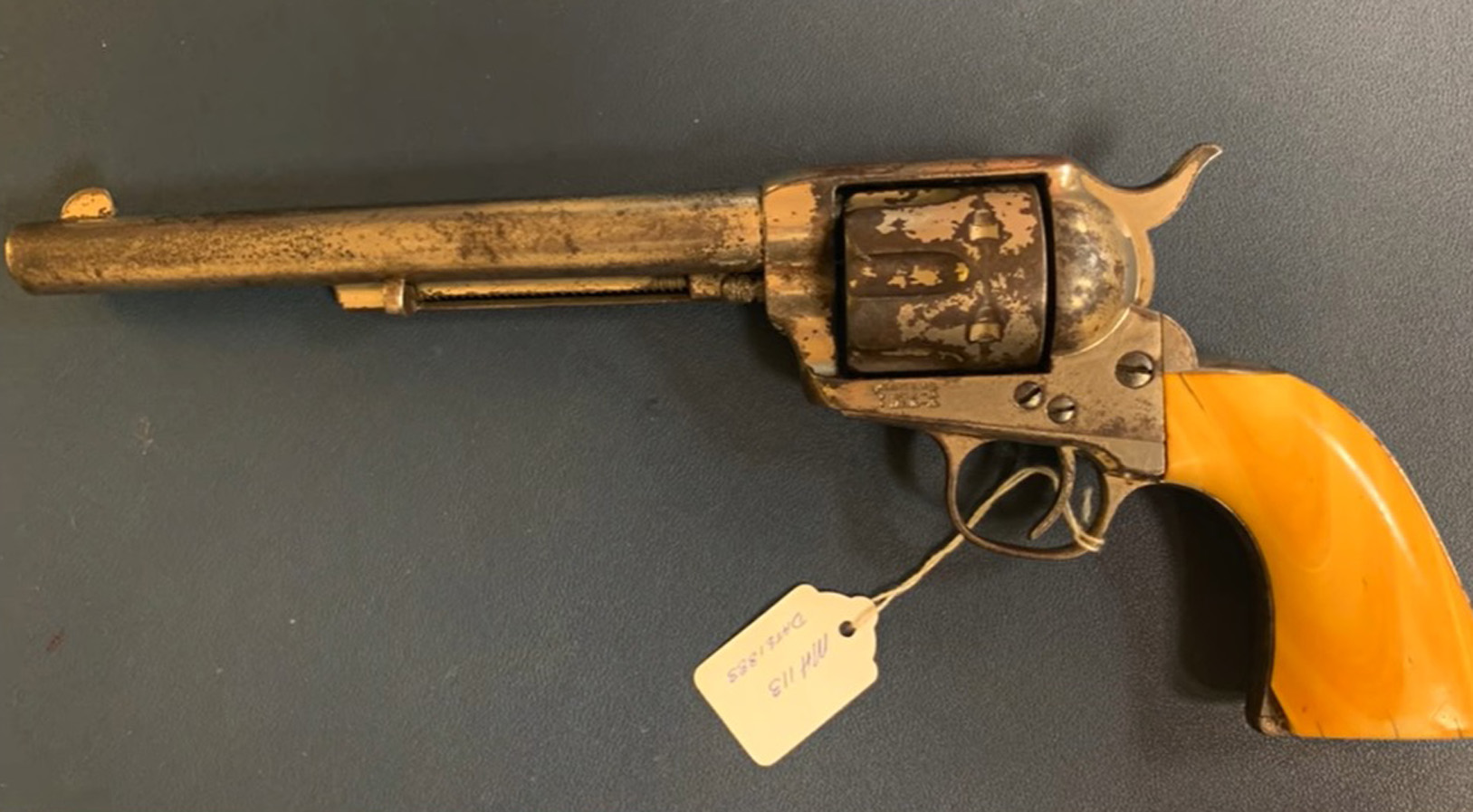 Harvey, founder and CEO of Cimarron Firearms, is adamant that the Old West firearms Cimarron markets are fastidious replicas of the real deal. In working with the company’s various manufacturing partners, Harvey often produces a piece of American Western shooting-iron from his extensive collection to duplicate authentic details of the specific firearm. Many of the firearms Cimarron markets have been made legendary by outlaws, frontiersmen, or lawmen of the Old West. In this latest YouTube video, Harvey and cohort, Hudson, relay the story of how one such gun came into their possession.

John King Fisher was an outlaw, rancher, gunslinger, gambler, and lawman in the late 1800s in some of the most violent areas of Texas. Known for his confidence, or some might say swagger, his fine clothes, and his deadly gun skills, Fisher led a life more commonly read about in the dime novels of his time.

Unfortunately for him and a friend, a night of debauchery in 1884 led him to the Vaudeville Variety Theater in San Antonio, Texas, where he ran into a few individuals that were not on a hand-shaking relationship with the former sheriff of Uvalde County and King Fisher died in his last gun battle. He was laid to rest, which lasted until the early 1950s when progress in the form of a new road required the outlaw turned lawman be moved to a new location to continue his everlasting slumber. A former judge, Chief of Police, and other lawmen attended to the coffin removal in the dark of night to not rouse potential onlookers or journalists. Much to their surprise, King Fisher was buried in a steel coffin complete with small boat-like portholes on the sides. When they shone a flashlight into one of the portholes, they noticed King Fisher’s pistols still by his side.

Of course, as the story goes, during the coffin removal, it accidentally opened and the team realized that the pistols were better in possession of the police than providing an opportunity for any graverobber. And so, our nickel-plated 1883 44 Colt SAA sat quietly in a safe belonging to one of the officers at the coffin opening.

Fast forward thirty years and in the quiet, quaint town of Fredericksburg, Texas, a new store opened. Texas Jacks carried cowboy-style clothing and accessories and was the showcase store for the new firearms company, Cimarron, founded by Harvey. The 1883 44 Colt, now in the hands of the retired judge that witnessed its clandestine removal, entered the store and was met by Hudson behind the gun counter. After the judge conveyed the story, he informed Hudson that the King Fisher gun was his for a mere $1,000.

The asking price was steep, even in those days, and especially for a new business and young family, but Harvey made it happen and the legendary gun became a new addition to the Cimarron Firearms historic Old West collection.

And there it sat for another 25 years. One day, a local reporter and customer, doing business in the Texas Jacks store, happened to see the gun on display and asked Harvey how he came to own this gun. It was only then that Harvey learned about the provenance of the pistol, from steel grave to glass display case, through Hudson’s efforts.

As Harvey and Hudson remember the early years of the business and the many stories behind the Old West gun collection, a twinkle comes to Harvey’s eyes, as he asks the camera, if perhaps Cimarron should make a replica of the Texas Pistoleer’s 1883 nickel-plated 44 Colt SAA pistol. Make your opinion heard in the comments of the latest Cimarron Original’s YouTube video on the King Fisher pistol.