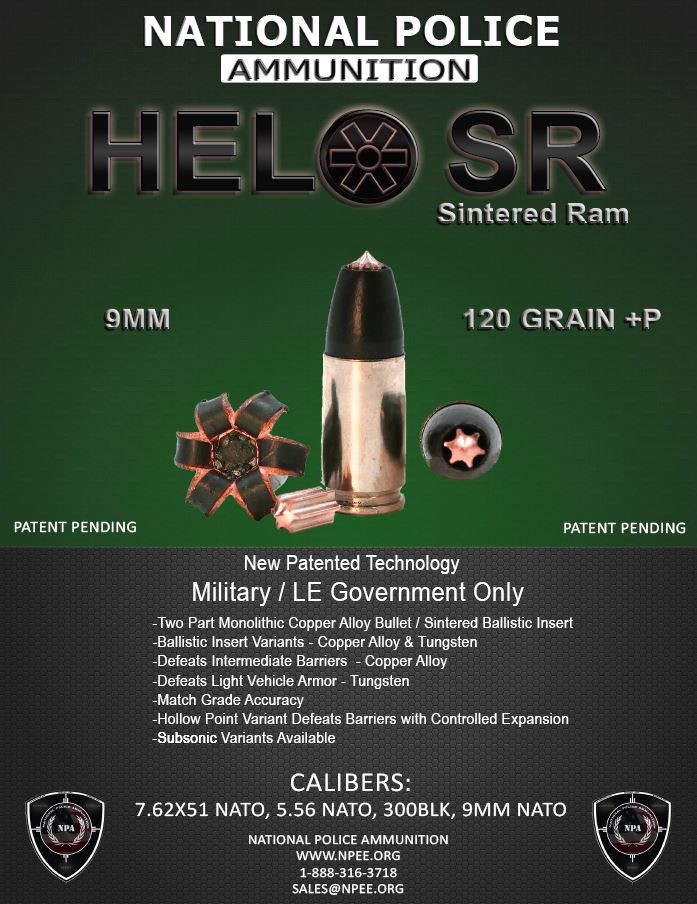 The NPA Patented Pending HELO SR is designed for law enforcement and specifically to pass and exceed all FBI performance protocols.

NPA patent pending SR ballistic insert utilizes a metal alloy sintered tip that will not deform in flight and acts as a barrier blind round by allowing the ballistic tip to defeat intermediate barriers then release from the main body of the projectile once encountering soft tissue allowing complete energy transfer and controlled expansion of the main body of the hollow point bullet mitigating risk of over-penetration.

The patent pending sintered alloy fluted insert is much denser that other products on the market that use a polymer, nylon, or a plastic material giving the HELO SR greater ability to stay intact when passing through FBI protocol barriers such as auto glass, steel, plywood, and drywall.

Once the bullet encounters soft tissue a hydraulic effect is created when entering the cavities between the flutes thereby forcing the bullet to expand and releasing the ballistic insert from the main body of the hollow point.

NPA will first introduce the HELO SR pistol cartridge in the increasingly popular 9mm among law enforcement and will be expanding the line to all other major calibers.

There are two variants developed of the HELO SR one being restricted to the law enforcement market and a second designed for civilian self-defense distributed by NPA’s commercial brand Alchemist Ammunition.

Based in Miami, Florida National Police ammunition is one of the leading manufacturers of lead-free ammunition in the United States whose products have been tested, approved, and recommended by State and Federal law enforcement.  NPA’s products are held to the strictest of quality controls which have been developed with our customers to address the unique requirements of law enforcement agencies.  NPA consistently provides superior lead times, outstanding service, and the most cost-effective lead-free products to the industry. NPEE.org