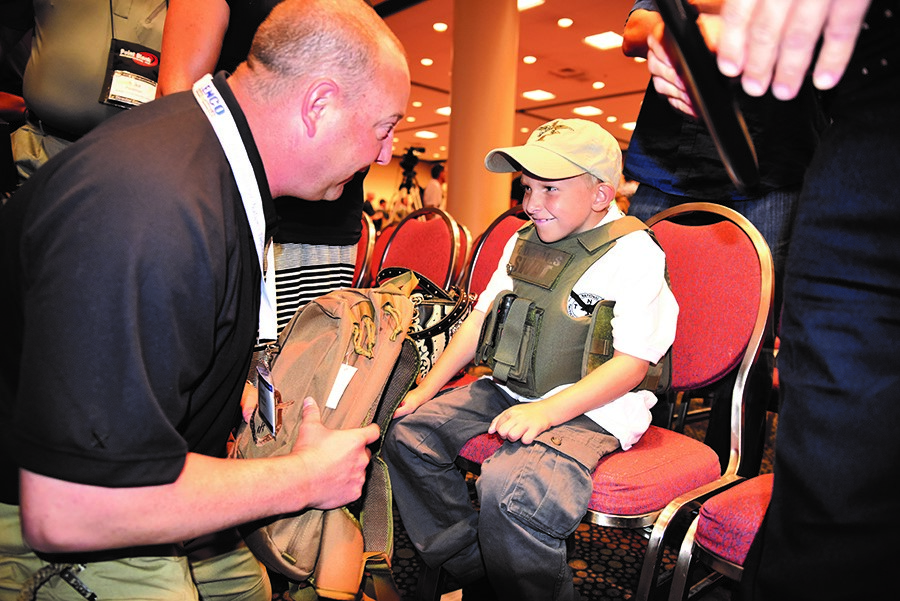 The National Tactical Officers Association (NTOA) has concluded its 32nd Annual Tactical Operations Conference and Trade Show, drawing in 850 students from the U.S. and other countries,  and featuring more than 250 exhibitors at its trade show. The event was held in Salt Lake City, Utah, on Aug. 30 to Sept. 4, 2015.

“We were honored by the presence of our members. They don’t require or ask for recognition or awards, but their character leads them to do the right thing for the right reason and at the right time — that’s who they are. We recognize that and we applaud all that they do for our communities,” said Mark Lomax, executive director of the NTOA.

One of the most stirring moments occurred when attendees welcomed honorary SWAT member Timothy “Danger” Miles, an 8-year-old Salt Lake City boy fighting a terminal illness. One of Tim’s greatest wishes was to spend time with a real SWAT team. Mike Foreman, NTOA board member emeritus and executive vice president of Point Blank Enterprises, presented Tim with his own custom-made entry vest. He proudly wore his vest throughout the day as he visited the trade show and spent time with SWAT officers from around the world.

Attendees were fortunate to hear an incident debrief from Kristina Anderson of the Koshka Foundation for Safe Schools. Anderson shared her story as one of the most critically injured survivors of the 2007 Virginia Tech massacre, and her role today as founder of a nonprofit organization dedicated to helping local communities and schools work together to prevent, respond to and heal in the aftermath of school violence.

On Sunday, attendees enjoyed the annual 5K Fun Run and barbecue hosted by Point Blank Enterprises. All proceeds from the 5K directly benefit the NTOA’s James Torkar Educational Scholarship Fund. For the current school year, the fund awarded six $2,500 scholarships to dependent children of our members.

Beginning Tuesday, attendees participated in seminars at the host hotel and practical courses at locations throughout the Greater Salt Lake area. Both the SWAT Team Leader Development and SWAT Command Decision-Making and Leadership II seminars filled up early and were highly rated by those in attendance.

During the annual banquet on Thursday evening, attendees were honored to hear from keynote speaker Sheriff David A. Clarke Jr. of the Milwaukee County Sheriff’s Office. Clarke reminded attendees to tune out the criticism of law enforcement, stay focused on the mission and remember why they aspired to this honorable occupation.

The NTOA’s popular SWAT Call Out Dinners were held for the 11th consecutive year, treating groups of attendees, along with sponsors and NTOA representatives, to dinner and conversation at a variety of local venues.

The 33rd Annual Tactical Operations Conference and Trade Show will be held in Louisville, Kentucky, on Aug. 14 – 20, 2016. Visit www.ntoa.org for updates on the conference.

For more information on the National Tactical Officers Association, visit www.ntoa.org or call 800-279-9127.