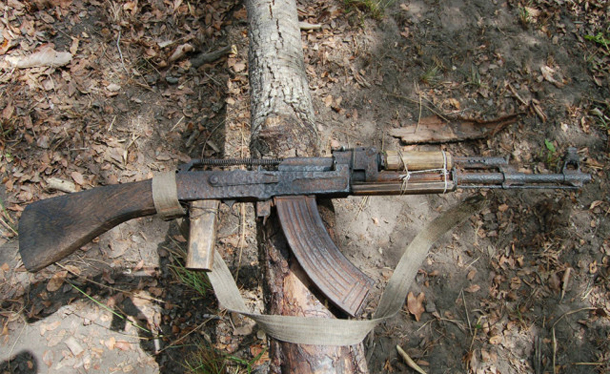 BUILT TO LAST
If you ask any Kalashnikov-proponent what makes the AK superior to other rifles, durability will likely be one of the first things they mention. Earlier this month, a photo of a Chinese-made Type 56 AK appeared on Instagram, reportedly pulled off African poachers. However, despite its salvaged wood furniture, dimpled metal, bent barrel and lack of dust cover, the rifle still functions perfectly, providing even more firepower for the raging AK versus AR debate. It’s certainly not new, but it’s clear this gun has never been a safe queen—and that’s just how it should be. (via Guns.com)

[youtube https://www.youtube.com/watch?v=B9LIAAdXOiU?rel=0] HIGH-TECH GUN LOCK
From locks to empty chamber indicators, handgun safety is a booming sector of the firearms industry. The latest company to enter the arena is ZØRE, founded by IDF and elite technology unit veterans with their first product as is the ZØRE X. Using an expandable “bullet” barrel lock with an activation button and turn dial, the ZØRE X claims to be the “fastest way to go from a locked firearm to disengaging and chambering a round and firing it,” as depicted in the video above. The lock can also be connected to a mobile app to alert an owner when their gun is being tampered with. Ironically, while the company says locks can be difficult to operate, I can’t imagine cracking the code on this lock under the duress of a home invasion. (via OutdoorHub) [youtube https://www.youtube.com/watch?v=lWmFu-_54fI?rel=0] BULLET BITES THE DUST
Tough enough to turn an armor piercing bullet into dust on impact and lighter than metal plating, North Carolina State University mechanical and aerospace engineering professor Afsaneh Rabiei has spent years developing and testing composite metal foams (CMFs). A recent video, accompanying a press release from the institution, shows a 7.62x63mm M2 armor piercing bullet turning into a cloud of dust when shot at a panel of CMF armor. Just how strong are CMFs? NIJ standard allows up to 44mm indentation in the back of an armor; the CMF armor gave less than 8mm. Given its characteristics and performance, Rabiei believes CMF is a viable option for creating new types of body and vehicle armor. (via OutdoorHub)