[youtube https://www.youtube.com/watch?v=qAK4iBHwCT4] WILDERNESS SURVIVAL IN YOUR WALLET
Primitive technology with a modern twist, special operations gear manufacturer RE Factor Tactical is known for unconventional solutions. Recently, their new Wilderness Survival Card has been making noise on social media with many praising the its simplicity and versatility. Made from stainless steel the 3.5″ x 2″ card is designed to fit perfectly in a wallet and includes 20 different integrated tools, including multiple arrowheads, fishing hooks, snare locks and sewing needs, as well as a trident, dual-sided saw and tweezers. Many of the tools can serve multiple purposes if you’re the creative type. “Built with only the most essential tools to keep you alive in a survival scenario,” the Wilderness Survival Card, priced at $24.95, has its limitations, but it sure beats not having any tools at all. 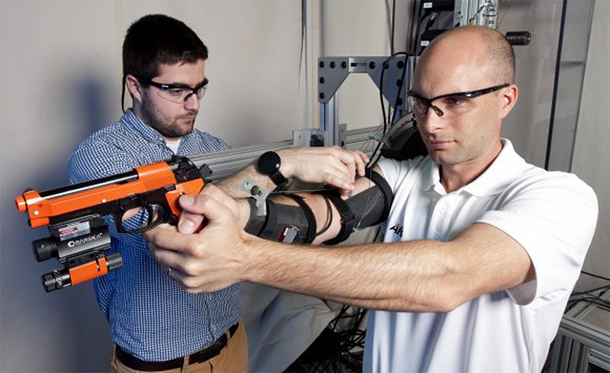 US ARMY ROBOTICS SEEK TO STABILIZE SHOOTING
Who knew the 1986 science-fiction horror movie ‘Aliens’ could be so inspirational? However, that’s exactly where the idea for a new military mechatronic arm exoskeleton (MAXFAS) came from. Developed by mechanical engineer Dan Baechle at the U.S. Army Research Laboratory, the MAXFAS “is designed so that it could be used to train new soldiers to reach shooting proficiency faster,” using motors and cables to move the arm, much like a puppeteer. According to Baechle, “soldiers need to be able to aim and shoot accurately and quickly in the chaos of the battlefield…training with MAXFAS could improve soldiers’ accuracy and reduce current time and ammunition requirements in basic training.” Initial tests demonstrated tremors were lessened, even after removing the device. Baechle is also conscious of the modern-day soldier’s current gear, using carbon fiber to add performance without adding much weight. And while the idea may seem far-fetched, Baechle believes “we are making great progress toward making science fiction a reality.” (via U.S. Army)

[youtube https://www.youtube.com/watch?v=ch7HwhGynXk] THE ISLAND WHERE GUNS ARE REQUIRED
Located 78.2°N 15.6°E, midway between continental Norway and the North Pole, lies an island in the Arctic Ocean known as Svalbard. First taken as a whaling base in the 17th and 18th centuries before coal mining a couple of centuries later, Svalbard is now primarily a research and tourist destination only accessible by boat or plane; traveling on the island itself can be just as difficult. But this isn’t a history lesson, Svalbard is in the news for being recognized as the only place on Earth where carrying a firearm is a legal requirement. Home to one of Mother Nature’s fiercest creatures and the third largest species of its kind, Svalbard put its new law into place after multiple deadly attacks by polar bears on tourists. Today, any groups traveling outside the main settlements must have at least one rifle with them, along with someone who knows how to use it, as a last-ditch effort in a worst case scenario. This reminds me, did anyone else watch the UK television drama ‘Fortitude‘ this past winter? (via Outdoor Hub)