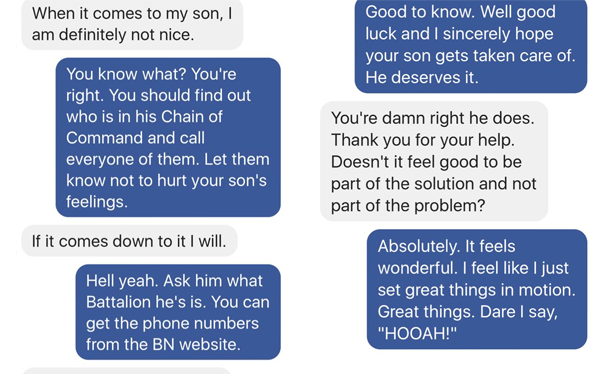 [youtube https://www.youtube.com/watch?v=iX7vwivR6cE?rel=0] BELT-FED 12-GAUGE SHOTGUN
One of the great things about the Internet is that content exists forever, so even seven years after something was originally posted, we can still enjoy it like it was the first time. That’s exactly the case with this video going around this week of a belt-fed 12-gauge. Technically, the custom upper makes this a semi-auto shotgun, but the fun sear AR-15 lower allows it to fire at full auto. A prototype at the time, the YouTuber who originally uploaded the video has never posted an update to the belt-fed beast. At least we can always rewatch this video on the Internet.

ARMY MOM GETS TROLLED
By nature, all mothers are protective of their children, but some “helicopter” parents take it too far. This week, the guys over at 5Bravo received a private message from a mom whose son had not received a Combat Patch despite “graduating at the top of his class in boot camp.” Instead of taking the easy route, 5Bravo decided to troll the poor mom, encouraging her to contact her son’s battalion and complain about the outrageous unfairness, even going so far as to promise “he won’t face any reprisals.” If you’re in need of a good laugh, Army Mom followed up with 5Bravo a couple days later and was far from pleased. (via ASMDSS)

[youtube https://www.youtube.com/watch?v=S6V0S1m5a7U?rel=0] THE DANGERS OF TANNERITE
If you subscribe to any gun channel on YouTube, chances are you’ve seen the incredible explosive power of Tannerite. With its growing popularity, more people are using the binary explosive in both creative and dangerous ways. Unfortunately for one Georgia man, his use falls into the latter category. After shooting a lawnmower loaded with 3-pounds of Tannerite, shrapnel from the resulting explosion severed David Presley’s leg below the knee, somehow missing his friends directly behind him. A mere 50 feet from the mower when it exploded, Tannerite safety guidelines recommend shooters be at least 100 yards away from the target per pound of explosive. (via Guns.com)