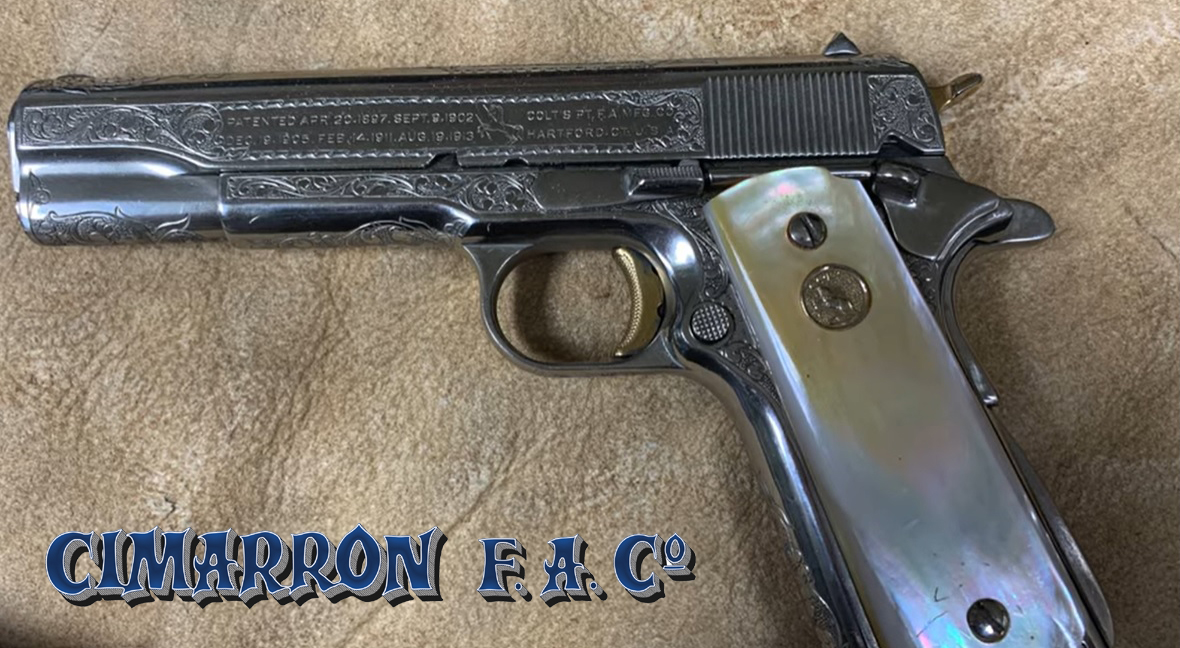 Fredericksburg, Texas (July 2021) – In the latest Cimarron Originals with Mike Harvey, Cimarron Firearms President Mike Harvey unlocks the historic and colorful past of yet another firearm in his collection. Mike begins his story with a brief look back on the history of Cimarron Firearms’ beginnings and how in 1981 a unique, highly engraved 1911 came into his possession.

In around 1981, a local lawyer and a friend of Mike’s came into Big Foot, the West Houston store owned by Mike before Cimarron Firearms. The gentleman was interested in trading a fully engraved 1911 previously owned by a former Texas Ranger and well-known Sheriff. Charles Hudson, manager at Big Foot, traded a Henry rifle and Bowie knife for the 1911 after much back and forth.

The 1911 with beautiful engraving and gold plating on the trigger and hammer had been previously owned by the High Sheriff of Fayette County in Texas, Jim Flournoy. As a former Texas Ranger and beloved sheriff, Flournoy served as sheriff for 40 years, and like many of the Texas law enforcement family, became part of Texas legend. 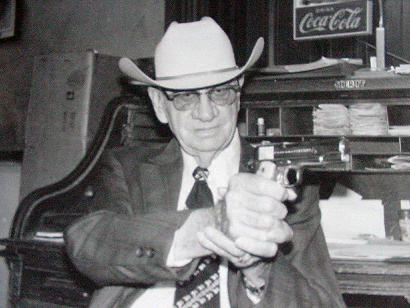 In a little town called LaGrange, a bordello operated for almost 100 years. During the Depression, it became known affectionately as the Chicken Ranch, since most customers couldn’t pay for services with cash and instead traded farm produce, or better for the girls, egg-producing chickens. In 1962, a former employee, Edna Milton, took over the ranch and ran the bordello like a business, insisting on cleanliness, respectability, and community philanthropy. Sheriff Flournoy allowed the Chicken Ranch to continue and it prospered. He had a direct telephone line put into the Chicken Ranch to keep tabs on customers that might have confessed a crime during a moment of risky business. Unfortunately, a local TV reporter, Marvin Zindler, had it out for the Ranch and using his media platform reached a national audience decrying the illegal bordello until Texas Governor Dolph Brisoe had it shut down in 1973.

Larry L. King, a playwright, novelist, and a son of Texas, inspired by the Chicken Ranch saga, wrote a book, “The Best Little Whorehouse in Texas,” from which a musical play was created, which was nominated for seven Tony awards during its long run on Broadway.

Flash forward to 1981-82, shortly after Hudson sealed the trade for the 1911, a musical movie of the same title, featuring Burt Reynolds as Flournoy and Dolly Parton as Edna hit the theaters, becoming the fourth highest-grossing musical movie made during the 1980s. Mike Harvey considers the timing of the trade for Flournoy’s 1911 to be very fortuitous as it might have been out of reach once the movie came out with such success.

“I might make a replica of this,” Mike pondered in the video. Fans of Cimarron Firearms hope to see a Chicken Ranch 1911 sometime in the future.