A Gun Virgin No More

When I joined LBM in 2009, I came into the Law Enforcement / Military / Hunting / Sport Shooting markets with no personal gun experience. My knack was for Marketing and PR. I’d worked in many various industries prior – financial, tech for staffing and recruiting, boating and equine – but never guns. Sure, I’d been exposed to it since I was a small child. Laura (my mom and founder of LBM) had been in the gun industry since I was 8 and I had helped her throughout the years assemble press kits for clients, attend SHOT Show, create databases and the like, but it was all second-hand. My parents enjoy shooting sport clays and even participated in their first 3-Gun match last year, but again, I never bothered to pick up a gun.

That all changed last week. I went to Norfolk, VA to help Laura with the first ever BLACKHAWK! Bloggers Seminar. I was going to be the blogger, the tweeter and Facebook poster for the event for BLACKHAWK! and LBM. I went not expecting to pick up a gun, but left that seminar having fired a shotgun and a handgun.

It all started when I was photographing the morning shotgun demonstration. The bloggers were testing out shotguns equipped with KNOXX Stocks. Not expecting to pick up a gun that day, I went dressed in pearls, heels and a dress naturally. Toward the end of the demonstration,  Todd Jarrett, 5 time World Champion, who was leading the demonstration that day, called me over.

“Oh, no thanks. I’ve never shot a gun.” I nonchalantly replied.

Todd told me that was going to change that day. So with a little apprehension, I approached my first shotgun. First thing to go were the heels. Not knowing what to expect, I figured that recoil + heels were not a good mix and did not feel like a) ruining my heels that day or b) falling over in a dress. I felt more secure knowing that I had such a great teacher to instruct me on my first shotgun. I mean, how many people can say that Todd Jarrett taught them how to shoot a gun? 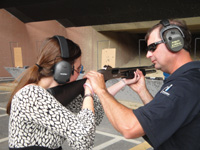 Todd went over the basic mechanics of the shotgun and showed me the proper stance. After a few demonstrations it was my turn to try the gun. I got in my stance, I aimed at the target and pulled. Huh, that wasn’t so bad. That wasn’t scary at all. And wow, barely any recoil (thanks KNOXX Stocks!). Ok, I could get used to this. Let’s try it again. I fired a few more rounds before it was time to go and although I am no shotgun expert, I now know how to handle one. 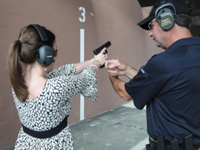 Later that afternoon it was time for handguns. Of course Todd wasn’t going to let me get away with not shooting one. So again, once the bloggers had their fun, it was my turn to learn how to fire a handgun. Todd went over the mechanisms, how to properly hold the gun and stand with it, in addition to how to load it (that’s important!). We went over a couple of drills where he guided my finger through the pull of the trigger while I got a hang of lining up my sites. Once he thought I was ready, he let me go. I must say I did pretty well with a handgun. My aim was pretty good and Todd estimated I had about an 85% accuracy rate. The target I used was a standard FBI testing target. Once Todd examined it he told me I’d be qualified to be in the FBI. Pretty sweet.

Of course while this was all happening, Laura stood diligently by taking a plethora of photos and immediately sending them out to our family. Who knew a mother could be so proud to witness her daughter’s first shotgun and handgun shoot? 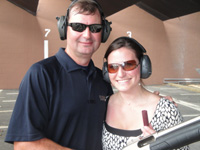 All in all I had a blast that day. Who knew I would enjoy firing a gun as much as I did. I have to thank Todd for taking the time to teach me, despite my ill attire (or maybe the pearls/dress/heel combo can be my signature?). I’m definitely looking forward to the next time I’m on the range.