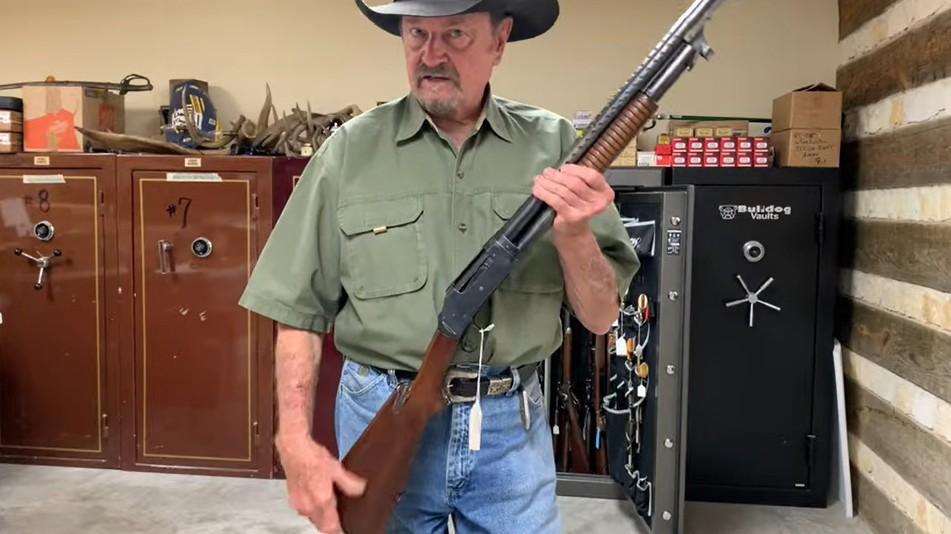 In the latest Cimarron Originals with Mike Harvey YouTube series, Harvey reveals the initial process of choosing the next Cimarron Firearms project. He introduces his original 1897 Pump Action WWII Trench Gun that will become a Cimarron Original.

Fredericksburg, Texas (October 2021) – If you have ever wondered how a company like Cimarron Firearms, makers of quality replicas of Old West firearms, come up with their next firearm introduction, Mike Harvey, CEO of Cimarron Firearms, lets you in on his little secret in the latest Cimarron Originals with Mike Harvey video on their YouTube Channel.

The first step in developing a new project requires digging through five large firearm safes loaded with approximately 60 historical firearms to find the one unique gun that will become the next Cimarron authentically reproduced replica. Harvey mentions that if he doesn’t find what he is looking for in his company safes, there are about the same amount at home. This initial step, of choosing the actual historic firearm to replicate, is what sets Cimarron apart from the competition. No other company builds replicas with the original details and historic references that Cimarron requires of its manufacturers.

Harvey’s decision for Cimarron’s next project is to build a replica 1897 pump-action Trench Gun based on the 1897 WWII version he owns. The original 1897 Winchester-made shotgun was based on the John Browning-designed 1893 shotgun, and as the next evolution, the 1897 was a more robust version designed for military use. First produced for American soldiers in the 1899 Philippine-American War, it later received the distinction as an effective “trench gun” during the first World War.

World War l, known for its horrendous trench warfare, was where the 1897 became synonymously known as the “trench sweeper.” The 20” barrel and the ability to rapidly fire the five-round mag made the shotgun the ultimate close combat weapon and was so feared by the German Army, they had tried to have it banned. Between 1897 and 1957 over one million shotguns were produced and used mainly by the military, law enforcement, and American security companies.

With the decision to replicate this very popular defensive shotgun, Harvey’s company, Cimarron Firearms, will be the only importer and distributor of this iconic self-defense shotgun. As part of the new product process, Harvey will have several decisions to consider on the 1897 shotgun, including whether to build it as a take-down or solid frame. Watch the video and leave your opinion.