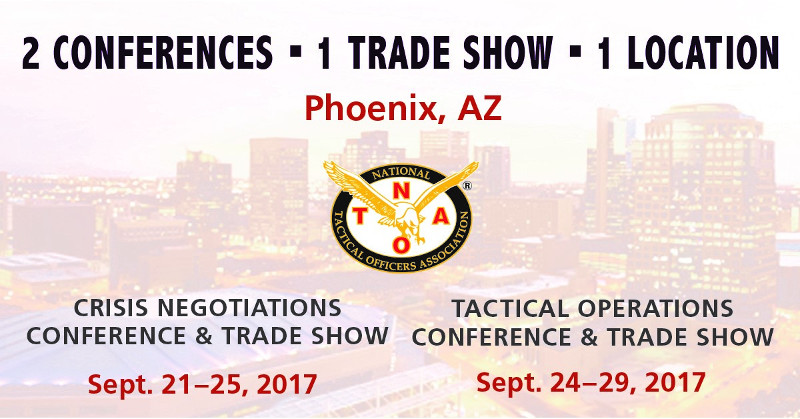 Debriefs on the Pulse nightclub shooting, Dallas police shootout, Washington Navy Yard shooter and others to be held during annual conferences in Phoenix, Arizona.

Doylestown, Pa. (July 2017) – The National Tactical Officers Association (NTOA) has announced its incident debrief topics and schedule for the 17th Annual Crisis Negotiations Conference & Trade Show on Sept. 21 – 25 and the 34th Annual Tactical Operations Conference & Trade Show, on Sept. 24 – 29, 2017, both to be held at the Sheraton Grand in Phoenix, Arizona. The Pulse nightclub shooting, Dallas police shootout and Washington Navy Yard shooter are among several incidents to be discussed. As part of their registration fee, participants of both conferences will be able to attend the Sunday, Sept. 24 and Monday, Sept. 25 debriefs, as well as our two-day Trade Show, all in one convenient location.

“Hearing firsthand debriefs of recent critical incidents, from experienced officers, provides our members with some of the most effective learning opportunities. We have a stellar lineup of debriefs this year that our membership will find truly beneficial,” said Don Kester, Director of Training and Education.

For more information on the National Tactical Officers Association, visit www.ntoa.org or call 800-279-9127. Join the NTOA today and start receiving the benefits of better training and stay on top of the ever-changing and challenging world of law enforcement.

About the National Tactical Officers Association: