During the 31st annual general meeting of the National Association of Police Equipment Distributors (NAPED) in Daytona Beach, Tim Brown of G.T. Distributors was elected new president of NAPED’s Board of Directors.

New Bern, N.C. (July 2017) – The National Association of Police Equipment Distributors (NAPED) elected Tim Brown as the Board of Directors new President for a one-year period. During the 31st NAPED Annual General Meeting at Daytona Beach, Florida, the seven-member board elected Tim Brown to replace Eldon Griggs, VP of Business Development at GALLS, who will now serve on the BOD as Past President. 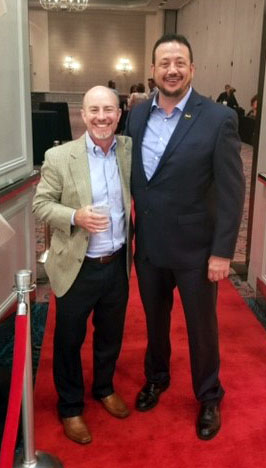 During an emotional acceptance speech at the NAPED banquet, Brown expressed his gratitude to his family and colleagues for bringing him “full circle” in his life and profession. Brown will now work with the board and membership to drive new members and bring greater value to its membership during his tenure.

“It is an honor to serve this association,” Tim Brown commented. “I have been involved for a long time with NAPED and truly believe in the value of our networking to help companies achieve success in our rapidly changing marketplace. Now, more than ever, our association is a valuable tool to grow businesses within our industry and I and the board are committed to bringing this awareness to our industry members.”

“I am pleased to turn over a healthy and growing association into the confident hands of our new president, Tim Brown,” Eldon Griggs added. “Under my two-year presidency, NAPED saw dramatic change and this year has demonstrated that our association is alive, dynamic and thriving in our current economy. We have much more to bring to the table for our membership in the coming year and I look forward to being there for Tim and the membership of NAPED.”

Interested in becoming a NAPED member? Contact Laura Burgess at 252-288-5805 or director@naped.com for more information and start enjoying the benefits today.

NAPED was created by bringing together law enforcement distributors, industry professionals and manufacturers to form a network for the purpose of mutually sharing the vast amounts of market experience, resources and product knowledge comprised within its membership. NAPED acts as a forum for member manufacturers and distributors to form long-term, profitable relationships. www.naped.com

On April 1st of 1972, GT Distributors opened its doors in Rossville, Georgia. Bill Orr, the founder, only had two suppliers: Smith & Wesson and Colt. Today GT carries over 500 name brands and has over 80 employees in a 31,000 sq. foot building located at 2545 Brockton Drive in Austin, Texas. This location is the corporate headquarters and the largest showroom in Texas and the five surrounding neighboring states.